Kangaroos are adapted to Australia’s variable climate and are abundant in rangelands where cattle and sheep are raised. However landholders rarely benefit from kangaroos on their lands or play a role in their management. An exception is a Cooperative of graziers in Queensland, established in 2009 with Landcare support.

The Cooperative seeks to increase the value of kangaroo products and to address kangaroos’ free ranging behaviour by enabling collaboration in their management across properties. Cooperative members are following trends throughout the world, where the value of native species is available to landholders and the result is wider conservation and biodiversity benefits. 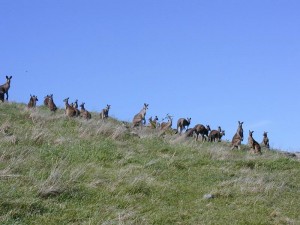 Methane from cattle and sheep is 11% of Australia’s total GHG. Kangaroos, on the other hand, produce negligible amounts of methane. Farmers have few options to reduce livestock GHG emissions.  An article in New Tork Times of 13 July 2010 described how researchers are trying to make cattle digestion more like kangaroos. It is not working however and the alternative of making greater use of kangaroos themseves to produce low emission meat  is one of the objectives of the Cooperative.

On the rangelands where kangaroo harvesting currently occurs, reducing cattle and sheep populations and increasing the kangaroo population to 175 million would produce the same amount of meat, and lower Australia’s GHG by 16 megatonnes, or 3% of Australia’s emissions. The potential carbon savings and biodiversity benefits could also be sold on in the carbon markets – voluntary or compliance, or reduce penalties when a price is placed on carbon emissions. See full paper in Conservation Letters and at this link for details of the analysis.

The Cooperative is developing the mechanisms and processes which could allow these options to be taken up. While a broadscale changeover from beef and sheep to kangaroos on the rangelands is unlikely, even in the long term, greater use of kangaroos is an option that warrants further investigation as means of landholders reducing emission and adapting to climate change.

Notwithstanding the potential benefits and the enthusiasm of catchment management agencies for the Cooperative, the project is languishing for lack of further funding support, including a re-estimation of the methane production by kangaroos.

When livestock are included in Australia’s carbon pricing mechanisms, the costs of kangaroo emissions will be significantly cheaper than those for cattle and sheep, perhaps providing the incentive for farmers to switch to kangaroos.

Potential investors in the Cooperative are invited to contact AWS to discuss the opportunity.